THE UNVEILING OF JESUS AS JUDGE – PART 1 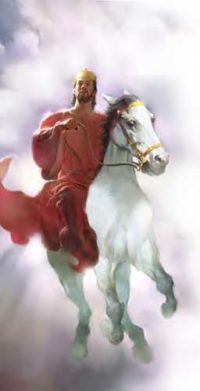 Charles Dickens opens his classic, A Tale of Two Cities with a series of paradoxical statements that paints a vivid picture of tumultuous times in England and France. The year is 1775, and while England is soon to lose its grip on the American colonies, France is soon to face total anarchy as the peasants arise to overthrow a corrupt and decadent regime. England is rife with crime and France with poverty. While life for the nobility was exquisite, the lower class struggled to survive. The plight of the times raised serious questions about man’s ability to rule justly and the desire of man’s heart to serve selflessly.

Two centuries later the world remains at the same threshold. In the midst of man’s growing technological, scientific and medical wisdom, there is a staggering increase of self-indulgent behavior ranging from drug abuse to aberrant and illicit sex. Amidst the plethora of revelation and inscrutable evidence of the Creator, darkness multiplies in unprecedented participation in cults and the occult. The best and worst of times are at hand, and they are exposing the heart of man. Jeremiah 17:9 says, The heart is deceitful above all things, and desperately wicked: who can know it?

Our current state of affairs testifies against us; man has thrown off the knowledge of God. We are seeing Psalm 2:1-3 literally fulfilled before our eyes: Why do the nations rage, and the people plot a vain thing? The kings of the earth set themselves, and the rulers take counsel together, against the LORD and against His Anointed, saying, ‘Let us break Their bonds in pieces and cast away Their cords (God’s moral restraining law and grace) from us.’

Our times are similar to those spoken about in Judges 17:6: In those days there was no king in Israel; everyone did what was right in his own eyes. Notice that in those days there was no king – no leader to lead the people with righteousness and justice. But there is a King. His name is Jesus and He is and is Lord over all! His death and Resurrection are a complete, finished work. His finished work established His kingdom and opened the way for us to leave this present darkness and enter into His glorious light. Entering His Kingdom cannot be a half-way or half-hearted choice. We are in one kingdom or the other. We cannot have one foot in the light and one in the dark. Unfortunately, the body of Christ continues to do just that: trying to live for God on a part-time basis while simultaneously living for self.

From the Garden of Eden, we have consistently preferred our plans to those of our Maker. The Bible and two thousand years of church history are replete with examples of our inability to follow and obey. This is why history continually repeats itself.

In 539 B.C. Cyrus, king of Persia, decreed that all exiled Jews could return from Babylon to Jerusalem to rebuild the temple of the Lord. However, Samaritan opposition quenched the initial effort after only three years. When Darius I assumed the throne, he silenced the opposition, which made it possible for the Israelites to resume their work, although it was the stern admonition of Haggai that refocused the attention of the Israelites. Haggai 1:5-7 states:

We must consider our ways and examine them in light of what the Lord says in His Word and what He speaks through His chosen vessels. In 2006, the prophetic voice resounded throughout the land speaking of a SHIFT and the importance of every believer to align with the purposes and plans of God. There is an open door in heaven for us to enter the purposes of God. Throughout scripture and experience when God opens one door, He shuts another. This is an hour of divine invitation. God has sent forth a call to enter in to all those who choose to hear His voice and are willing to follow His plan. Today if you hear His voice, do not harden your hearts.

This is a pivotal time of decision for the body of Christ. Just as in the days of Joshua, “we will choose this day whom we will serve” (Joshua 24:15). Jesus has told us, we cannot serve two masters. We will love one and despise the other (Matthew 6:24, Luke 16:13). The time to declare our allegiance is at hand. Jesus is calling for those who desire to serve Him and Him alone. Will you choose to be His chosen?

God Expects Us To Understand The Times and Seasons

The Bible clearly states we will not know the day or the hour of the Lord’s return. However, we are exhorted to discern the times and seasons of the Lord. The church, at large does not seem to be discerning the times at hand. God has been speaking loudly to His church for quite some time. He has spoken through the removal of His restraining grace in allowing terrorist attacks, hurricanes, tsunamis, earthquakes, volcanoes, fires and floods. He did not send any of these destructive forces, but these things testify that the wall of grace is down around this nation and the church. Humanity and our leaders (Psalm 2:1-3) have been systematically trying to remove every vestige of God’s word, law, influence and presence from the culture, especially in western society and thought. We must understand the seriousness of the times, focus our attention, and lay hold of His plans and purposes.

What is the Lord doing at this time? I believe the Lord’s work at this time is three-fold. The Spirit is moving the body of Messiah to: recognize Him as King and obey His commands, embrace Him as Bridegroom and prepare to be wed, and stand before Him as Judge, allowing Him to work His justice in and through us.

As we come to know and respond to Him in each of these dimensions, we recognize the work that needs to be accomplished in our own lives. We need to come into alignment with Him and His purposes. A glimpse into each one of these portraits will demonstrate what I mean.

We are to recognize and acknowledge Jesus as King

The Lord Himself is rebuilding the temple, but it is not a temple made with hands. It is the temple of our heart, the temple inside each of us (1 Cor. 3:16-18; 2 Cor. 6:16-18; Eph. 2:19-22). Jesus is working to extend His kingdom as He trains His people to live from His presence within. He desires us to live for Him completely and unreservedly. As we follow and obey the principles of His kingdom and represent His Image to the world, we extend His kingdom.

This is the way of the cross. It involves dying to self – our desires and our plans – as we wholly embrace the plans of The King. The Lord desires for us to enter fully into the Kingdom He has set before us, but we must choose to be chosen. It is a narrow road, but it is filled with His love, power and His glory. He is in search of soldiers who will accept His terms without question. This kind of commitment is equivalent to an unconditional surrender. It is a form of commitment that is foreign to the western mindset.

Those who have served in the military understand what it means to follow a commander. When an American military recruit takes the oath office, he or she literally steps across a line imprinted on the floor. This is a symbolic gesture to demonstrate the significance of the recruit’s decision. As each soldier steps across the line, he or she recognizes they are no longer their own. They lose all rights as an individual. Of course they are still a person, but they are now the property of the armed services; they are a part of something much larger than themselves. Each individual must learn to be obedient unto death, to go where they are told, when they are told, regardless of what it costs personally. This is a picture of true submission.

In contemporary society we have lost sense of respect and submission to authority. Western society emphasizes personal rights to such an extreme, that we think it is our right to be in control of every situation. We believe it is our duty to express our opinion at every juncture. If this were the case in the armed services, no battle would ever be waged. Every one would endlessly present their own battle plan.

During a battle strategy session, several officers may share their approach. However, when a strategy is determined and the meeting is adjourned, each commanding officer executes the orders given. He does not go out and announce to his command that he had a better plan, but no one would listen. That kind of talk would be considered treason. An officer gets behind the commander and executes the plan as if it is his own. Every officer comes out of the strategy sessions and says, “Here’s OUR plan.” Every soldier under his command follows his example.

This is the type of dedication and service the Lord desires AND deserves. It is an unconditional surrender to His will. The Lord is looking for soldiers. Ephesians 4:1 states, I, therefore, the prisoner of the Lord, beseech you to walk worthy of the calling with which you were called.

What is the Lord calling you to do? How are you preparing for the mission? If you have not accepted what He has called you to be and to do, He is not Lord over your life. You are still in command. If you are not preparing to fulfill your purpose wholeheartedly, will you be able to stand in the tough times that loom ahead?

When we are transparent and straightforward about where we are, we recognize we all have much work to do in allowing the Lord to take His place as the King of Kings in our lives. We must learn to put away our childish notions about what we want to do and be. We must recognize the need to come in line with the King and His kingdom. If we have not surrendered to Him as King we will never receive Him as Judge. Knowing Him as our Bridegroom is essential to being able to fully surrender to Him as King and Judge. (To be continued).