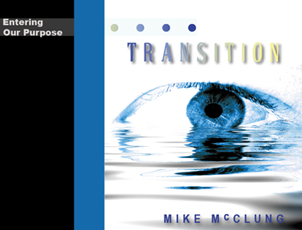 How do we prepare for destiny? It is not accomplished independently. It is attained through community and a joining of the generations. Just as we are transitioning as individuals, God is transitioning generations. The generation that has led us is now shifting to an advisory capacity. Like Moses, they have been forerunners; they have led the way into the depths of God. Now they are needed to counsel and advise the next generation. Leaders like Bill Johnson, Lou Engle and Mike Bickle represent a transitional generation that can join generations together. They are “raising up” the next generation to recognize their destiny before they are ensnared by the cares of this world.

The body of Christ has previously not sufficiently prepared young believers to face the demonic onslaught of our day. This is why many Christians involved in the arts and entertainment lose their way and never accomplish God’s plan. They settle for popularity or wealth, when God desired them to confront the culture with His kingdom. Elvis Presley was a youth pastor at an Assembly of God church when he was discovered. He frequently sang hymns and read the Bible amidst his own parties. The enemy got a hook in his dominion gifting due to corrupt people and their love for money; they led Elvis in the wrong direction. People would not tell him the truth or hold him accountable to what God called him to do and to be. Elvis did not have to give up serving the Lord to sing. Pat Boone is an example of one who never allowed his dominion gift to be overcome by the spirit of this world. Today, his entire family is serving the Lord.

It Begins In The Local Church

The church must be committed to transforming the lives of those whom God has entrusted to their care. In the local church, there are entrepreneurs with a dominion gift to change and transform the business community. These leaders should receive exceptional spiritual training through their local church. The church should bring them into an intimate encounter with the Lord, and train them how to prevail in prayer and spiritual warfare. The church isn’t to just take money from business leaders and build more buildings and programs. Many business leaders are apostles sent into the “commerce” mountain to bring the kingdom of God to that dimension of culture in their city or region. The church needs to train and equip leaders in hearing God and spiritual warfare. Then these young leaders will be able to speak life to those in authority over them in the business culture as to what is beneficial to the business. They will have supernatural answers and solutions for problems for which nobody has remedies. The Word tells us that:

Now it shall come to pass in the latter days that the mountain of the Lord’s house shall be established on the top of the mountains, and shall be exalted above the hills; and all nations shall flow to it. Isaiah 2:2 NKJV

This means that the Lord and those who follow Him will rule and reign above every other sphere of influence; He will accomplish this through His people exercising their authority in their dominion gifting. The above scripture is a direct reference to the re-establishing of the Tabernacle of David…the place of intimate encounter, worship and prayer. This burning intimate worship and intercession became the fuel for operating in dominion authority, as was exemplified in King David for whom the tabernacle was named (see Acts. 15:15-18; Amos 9:11-13), and also in the life of the Lord Jesus Himself.

Many believers are overcome by the spirit of the world. If they had been trained in intimacy and prevailing prayer from childhood, they would be ruling rather than facing defeat in their dominion gift. Many young celebrities are overcome by the spirit of the world because they never received correct spiritual training or discipline for character development. They were not ready to rule. We are all prone to be self-centered and consumed by the trappings of this world. We can’t be mediocre, which again means that we stop half way up the mountain. We are to overshadow the mountains of business, entertainment and government through the power of the Holy Spirit to bring transformation for all who have ears to hear.

Today, we know little about the process of discipleship. What was it like to be a disciple of a rabbi in Jesus time? Paul was a disciple of Gamaliel, a leading authority in the Sanhedrin. If you were chosen by a rabbi to be his disciple, you were to sit at his feet and bear his yoke. When Jesus chose the disciples, he did not choose them so they could be the best that they can be and do what they thought was best! The disciples were chosen to bear His yoke with their dominion gift. When we become a part of a local fellowship, God is joining us together so our dominion gift will help that local expression to accomplish what God desires to bring forth from that body of believers, and in that training, to eventually release it to the surrounding culture to impact it for the kingdom of God. As powerful an anointing as Daniel had, the Lord did not set him alone…he placed him in community with at least three other friends!

Many today think that they should do their own thing; that’s lawlessness! They do not respect the leadership of the fellowship they attend. If we are to come under the yoke of the Lord, we will first need to recognize that we don’t know much! We’re moving away from the mentality that one does what one wants, when one wants. God’s searching for disciples, and will not tolerate independent action.

A disciple is one who adheres to and follows the teachings of a leader. It is one who wears the yoke of the one served. It is one who embraces the narrow place. At our local fellowship, our primary mandate is to establish the spirit of the Tabernacle of David, with the manifest presence of the Lord central to our focus and practice. We are devoted to developing priests who exercise authority like Jesus, the King-Priest, and prophetic and apostolic leaders who will all be a vital part of the transformation God intends for this region. To be a part of this fellowship, one must bear the yoke of this mandate. When people are centered in the presence of God, their identity in Christ is established, character is formed, and they begin to fully operate in their dominion gifting.

Character is important for us. It is our defense against the attacks of Satan. Jesus was never attacked like he was by the enemy until His dominion gift was released at His baptism. The devil took notice when the Spirit of God came upon Him. Immediately, the devil initiated an aggressive attack in the desert; the attack was on the character of Jesus. The enemy’s strategy against us is the same today as with the Lord; it is to shut down our dominion gift—to nullify it. The devil cannot attack our gifts directly because our gifts are from God and they operate regardless of our state (Romans 11:29). They are activated by the Holy Spirit working through us to accomplish God’s purposes in the earth. The enemy knows he is no match for the Holy Spirit, therefore, he attempts to fill us with fear, doubt, unbelief, or lead us into sinful or carnal behavior to mar our character. What happened to Timothy is a perfect illustration of how the enemy tries to shut us down.

Therefore I remind you to stir up the gift of God which is in you through the laying on of my hands. For God has not given us a spirit of fear, but of power and of love and of a sound mind. 2 Timothy 1:6-7 NKJV

Timothy pastored the church in Ephesus which was one of the largest churches of the first century. He was a young man with tremendous responsibility. This is Paul’s message to Timothy: “God has not given you a spirit of fear.” He wanted Timothy to recognize where the fear was coming from, so he would know how to contend. Fear was shutting down Timothy’s dominion gifting. He needed to stir up what God had placed in his heart.